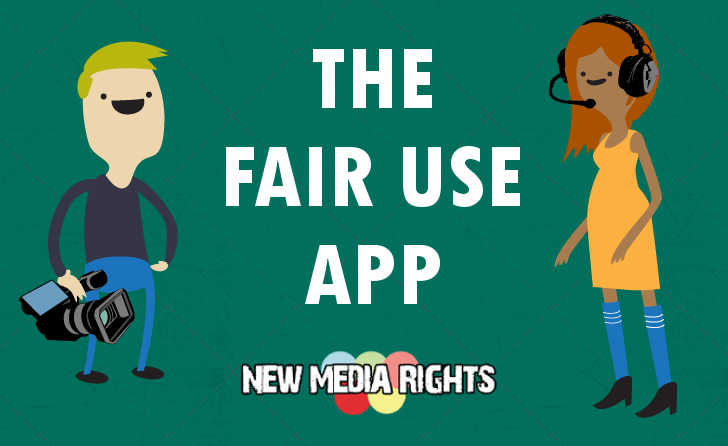 It's Fair Use Week 2019 this week, but every week is Fair Use Week for New Media Rights, because every day we fight for artists and innovators against legal bullies who don’t respect fair use and work to empower creators by providing them with important information on the law.

Fair use is the vehicle millions of individuals use to exercise their freedom of expression every day. That's why this week, we'll be highlighting why fair use is important to creators and what New Media Rights is doing and has done to support it.

WHAT IS FAIR USE?

Fair use allows creators, in limited circumstances, to use other people's copyrighted materials without permission from the copyright owners.

So why is this so important?

Free speech, creativity, and our economy all require strong limits on copyright holders. Otherwise political, educational, and cultural discourse can be controlled by copyright owners who can limit the use of their content by only those with pockets deep enough to pay for a license (legal permission).

Copyright law was written into the U.S. Constitution specifically "to promote the progress of science and useful arts..."

If you read this closely, you’ll notice that copyright law wasn’t created solely to ensure the owners of creative works make money. Instead, the Founding Fathers understood that the fundamental goal of copyright law is the public benefit from access to creative work. They wanted would-be creators to have an incentive to create, but they also knew that access to works was critical to provide societal benefits of artistic and scientific expression. So, they included a way to balance those two things in the Constitution: bestowing Congress with the power to grant creators the exclusive right to control their creation, with exceptions, for a limited period of time. And when that period expired, the public could legally copy or use that work for any purpose. Reflecting on copyright law’s benevolent purpose, the Supreme Court summarized it in one great little phrase: “[Copyright law exists to] stimulate artistic creativity for the general public good.” Twentieth Century Music Corp. v. Aiken, 422 U.S. 151, 156 (1975).

Although modern justifications for copyright may differ, U.S. copyright laws are meant for the public benefit as much as private benefit, and fair use is the safety valve that allows science and culture to progress while still allowing creators to make money off of and maintain control over their art.

Fair use allows many industries, including movies, music, and the Internet, to flourish. For example, fair use is the reason that search engines like Google and DuckDuckGo can exist. Looking at some examples of how many of us rely on fair use in our daily lives shows what an indispensable part of America’s economy and culture fair use is. From pop culture criticism, to video game and film reviews, political advertisements, news, documentaries, memes and more, fair use is there every day allowing us to have cultural and political discussions.

It's can be difficult to understand how critical fair use is to protecting free speech about social, political, and cultural issues without concrete examples. Here are some real life examples and discussions about fair use:

WHY IS FAIR USE WORTH PROTECTING?

Copyright gives copyright holders control over who can and can't reuse their work. This covers a lot of reuses, and now lasts for life plus 70 years after the author’s death (note it was 14 years at the founding of the United States). Unfortunately, some copyright holders want to overreach and control any use of their work, including who can discuss and criticize their work.

To attack artists relying on fair use, some copyright holders threaten lawsuits with excessive "statutory damages" and litigation to intimidate artists who make legitimate fair uses of a work. Artists faced with the choice between being sued or taking down their work will simply take down their work because they can't afford $300+/hour for a lawyer to defend them. This doesn't stop at just artists. Journalists, tech startups, documentarians all have their self-expression chilled or technological innovation stifled because it's not worth the risk of millions or billions of dollars in damages, even when the copyright holder's threat is bogus or "gray area" at best.

We've seen how easy it is to bully filmmakers, artists, and journalists attempting to rely on fair use...

We helped remix artist Jonathan McIntosh get his amazing 'Buffy Versus Edward' remix back up after it was repeatedly taken down. We also helped the Media Literacy Project stand up to a bogus copyright claim from a third party regarding their criticisms of some health related advertisements. We even helped the Lansdowne Library Teen Advisory Board get a group of middle school kids' Beat It parody video unmuted after it was disabled for the second time through YouTube’s Content ID system.  From YouTube, to Amazon, Etsy, Google Play, Apple Store, and more, we've seen first-hand how copyright owners overreach and abuse the system.

Threats of copyright takedown notices should not be used as a weapon against art or criticism copyright owners don't like. New Media Rights has been a strong advocate against "content bullying" (copyright holders using copyright to silence other's speech) You can read more about our work against content bullies here.

A strong, protected system of fair use and lawyers willing to stand up to bullies who use these intimidation tactics are keys to thriving cultural and technological innovation.

WHAT IS NEW MEDIA RIGHTS DOING TO SUPPORT FAIR USE?

Here are stories that show how important defending fair use is to protecting freedom of speech. Watch these films and videos from our clients to see films that rely on fair use in action.

Public Health - Painted Nails Movie - The negative health impact on workers of chemicals used in the nail salon industry, and the efforts to change the law to protect California nail industry workers.

Gender Inequality – My Love Affair With the Brain – The life and science of Dr. Marian Diamond, one of the founders of modern neuroscience.

Racial Discrimination - Valentino's Ghost: Why We Hate Arabs - A sweeping study of 100 years of popular culture representations of Muslims.

Racial Stereotypes and Representation – Bad Rap – The story of four Asian American rappers as they struggle to find their place within the mainstream music industry that doesn’t know how to categorize them except through stereotypes.

Environmental Degradation - Company Town Film - The environmental and health impacts on one Arkansas town of a Georgia Pacific paper mill.

Environmental Degradation – Reefs at Risk – Explores the harmful effects some sunscreen chemicals have on coral reefs, marine life, and people.

Since 2009, we've advocated at the Copyright Office for many exemptions to "Anti-Circumvention laws" so that creators can make more fair uses of copyrighted works. Last year, we combined efforts with the Electronic Frontier Foundation and the Organization for Transformative Works to request an improved exemption for the reuse of video clips that better respects fair use. Although the Copyright Office didn’t provide the exemption we were hoping for this time, we continue to work towards expanding and maintaining anti-circumvention exemptions so that filmmakers, educators, libraries, remix artists and others can continue to rely on the critical protections of fair use.

A Citizen’s Legal Guide to Fair Use in Copyright Law

Looking for more information on fair use? Check out our extensive citizen’s guide to fair use here.

New Media Rights built our Fair Use App to help video creators who ask the question "Can I reuse this?" If you're a creator using other people work in your work, learn more about when you can reuse content here

We also have a book! Available in print and audio-book, Don’t Panic J A Legal Guide (in plain English) for Small Businesses and Creative Professionals has an entire chapter on fair use, licensing, and open licensing.