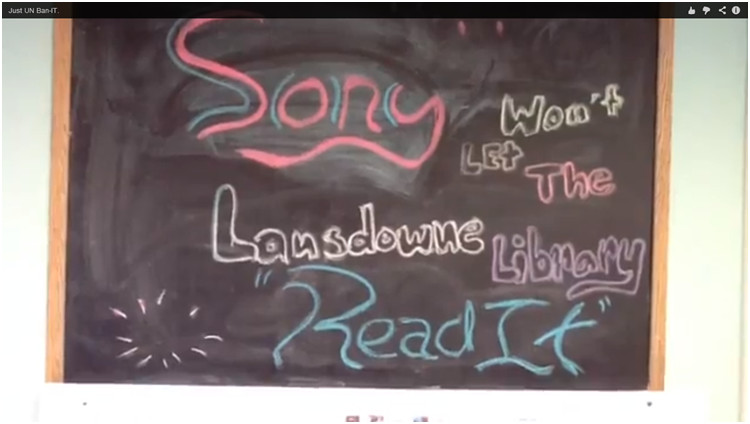 It’s been a year since the Lansdowne Library Teen Advisory Board created a video to promote reading based on Michael Jackson’s iconic “Beat It,” video. After it was posted on YouTube, Sony took down the video claiming the parody was “copyright infringement.” But after taking a bit a beating in the press for content bullying these amazing teens, Sony rescinded its claim and the video went back up.

That was the end of the story until now. Recently, the audio to the parody video was muted through YouTube’s Content ID system. The Library called Sony, but Sony claimed there was nothing they could do, that video was caught in what Sony called the “Youtube Vortex.” Together Lansdowne librarian Abbe Klebanoff and New Media Rights have now gotten the teens’ video restored using Youtube’s appeals process, but the story is a reminder that content bullying is alive and well.

In a world where it is easy for large media companies like Sony to remove content from services like Youtube, it should also be easy for these media companies to recognize and correct things when mistakes are made.

That’s exactly what the Lansdowne Library set out to do when they made a video parody of Michael Jacksons “Beat it” called “Just Read It!” After all, parodying the song was a perfect fit. Take a song about gang violence and turn it into a song that encourages kids to read.

Once the idea was brought up the kids really banded together to produce this video. They wrote all the lyrics and choreographed the video themselves.  For Abbe, it was exciting to see kids get involved with the library instead of hanging out on the streets, and being exposed to all the technology and learning related to filmmaking that they wouldn’t normally have access to.

The reaction to the video was a huge success. The library had more teens actively involved with the library than ever before. Abbe simply never thought she could get kids that engaged in the library.  Everything was going great until the video was suddenly taken down off of YouTube.

On November 19, 2012 Abbe discovered the video had been taken down.  Abbe told New Media Rights, “The kids were devastated that all their hard work just vanished!” Abbe desperately wanted to get the video back up since the kids worked so hard on it. So she did everything she could to get the video back up from filling out all the content ID appeals paperwork, making a YouTube video to protest the takedown, and even going to Sony’s offices in New York to ask for help.

Going to Sony’s office didn’t work; in fact Abbe was asked to leave. However, the library’s Director, Sandra Giannella, eventually got a hold of Sony. As Giannella told New Media Rights, Sony initially refused to put the video back up because it was a “message video,” and not fair use.

Sandra consulted with copyright lawyers at the time who told her Sony was wrong and that the video was allowed under fair use. Nevertheless, Sony absolutely refused to put the video back up.  At first Sony only wanted to allow the library to post the video on the library’s own site, which the small public library site just wasn’t equipped to handle.

Then the library reached out to the press. That’s when Sony changed their tune and finally allowed the kids to put their video back up on YouTube.   A Sony representative also asked that if the video was ever taken down again to call him first, not the press, and he would take care of it. 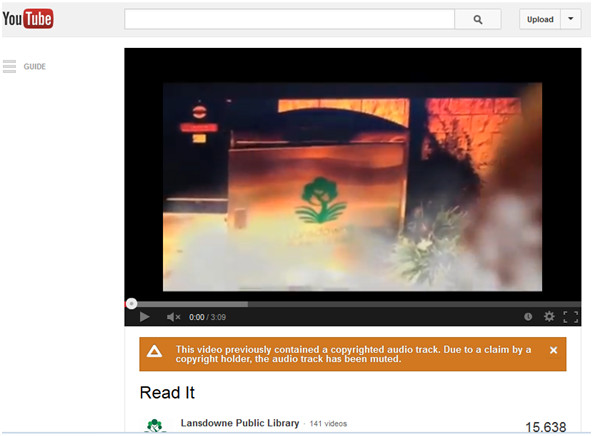 Sony tells the library and kids to just beat it… again.

All of that happened nearly a year ago. Since then the video received 15,600 views.  It even won a Best Practices Award from the Pennsylvania Library Association and was embedded on sites across the internet.

However, the Lansdowne Library recently discovered the audio track on their video had been disabled and muted by Sony through YouTube’s content ID system.  They thought this had to be a mistake. Less than a year ago Sony released their claim! They called Sony thinking this was just a mistake; surely they would unblock the video.

“The most exasperating thing Jimmy Asci[a Sony Representative] said was that he claimed that there was nothing Sony could do, that it was caught in the ‘YouTube vortex’ and even tried to cast blame on Warner Chappell, the previous owners of the song,” said Sandra.  According to Sandra, Mr. Asci even jokingly offered Sandra a job if she could get the video back up using YouTube’s system.

But none of Sony’s excuses were convincing to Sandra and Abbe. Especially considering they reached out to Sony first instead of the press, just like Sony asked us to.  That’s when Abbe reached out to New Media Rights, a non-profit known for standing up to content bullies like Sony.

Art Neill and Teri Karobonik at New Media Rights reviewed the case pro bono and explained to Abbe that the video has a strong fair use argument, that content owners like Sony do play a role in YouTube’s Content ID system and that because the takedown occurred based on a erroneous copyright claim from Sony, Sony should be willing to be involved in restoring the content.

Then, Art and Teri walked Abbe through the content ID appeals process on YouTube.  In the tiny window that YouTube allows for appeals this is what New Media Rights wrote:

This video is fair use because it is a parody. It takes Michael Jacksons song Beat It, a song that glorifies violence and gang culture, and transforms it into a powerful message promoting reading and libraries. This song is not a market substitute for the original song and was made for non-commercial use.

Early the following week Teri noticed the video had been un-muted and called Abbe to congratulate her and the kids. This was news to Abbe because YouTube had not sent her any kind of notice her appeal was successful.

Together Abbe and New Media Rights were able to get these teen’s awesome video back up using 53 words. 53 Words to stand up to Sony’s content bullying. 53 words to beat the “YouTube vortex” that was allegedly beyond the means of a large company like Sony.

One last thing, New Media Rights is a small, non-profit two lawyer operation on a shoe-string budget fighting to make sure content bullies don’t keep people like the teens and librarians at Lansdowne Public Library from posting lawful content online. So if you can, please consider donating to fight content bullying here.

Also, please consider donating to the Friends of the Lansdowne Public Library, who do so much to support the library and the great programs that allow them to reach out to the community like their “Just Read It!” video.