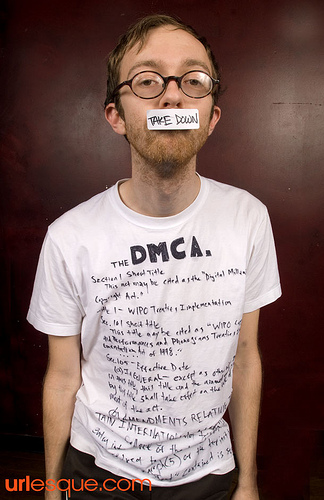 The DMCA 512(c) safe harbor creates a process allowing rightsholders to contact service providers (ie websites, social media services, IAPs) and request takedown of content they allege is infringing (see more specifics here). The safe harbor process has a built in balance, that allows users to respond with a counternotice and have content restored if the rightsholder decides not to file a lawsuit. Some common criticisms include that the safe harbors are 1) a prelitigation injunction, 2) can chill legitimate speech, and 3) service providers just don’t have the time to review content.

But here’s a new one, the fact that users are being denied enough information to even respond to content removal by DMCA takedowns. It may save time on the part of a service provider, but it results in gutting the DMCA of its important balancing mechanisms, both counternotification letters, as well as sanctions that can be enforced against a sender of takedown notices who “knowingly materially misrepresents” (512 (f)) “that material or activity is infringing” (512 (f)(1).

How this DMCA problem works

New Media Rights recently heard from a blogger who received notification that a takedown notice was sent to their service provider, a website that hosts individuals blogs, and that the user’s content was removed (the blogger chooses to remain anonymous).

The website notified him that a copyright owner alleged that he had infringed on his/her/its work, but failed to inform him of a) who exactly filed the notification against him, and b) any details of the assertions in the takedown notice. Was it for images, text, sound, video on the page, the blogger doesn’t know.

Despite much discussion of the DMCA and its “safe harbor” provisions, this poses an interesting question that gets little to no attention in the DMCA meme.

What is a service provider required to tell its user when it receives a notification of alleged copyright infringement? What does "reasonable steps" mean?

The DMCA is not very helpful. It says that the service provider must take “reasonable steps” to inform the user that it has removed or disabled access to the material. Nowhere does the DMCA define or explain what constitutes “reasonable steps.” Courts don’t seem to have addressed the issue either.

Moving beyond that ambiguity for a moment… the user may file a counter-notification if he or she believes that the material was incorrectly taken down. The counter-notification has to include, among other things, a statement under penalty of perjury that the user has a good faith belief that the material was “removed or disabled as a result of a mistake or misidentification of the material to be removed or disabled,”; the user’s name, address, and telephone number; and a statement that the person consents to Federal District Court jurisdiction and will accept service of process from the person who provide the original notification of alleged infringement.

1) The user / blogger has no clue who might be filing an action against them. DMCA takedown notices can only be sent by the actual copyright owner, but they are often sent by bully third parties who simply don’t like the content. Providing the user with no identification of the sender of the takedown notice means users who have content taken down cannot challenge the takedown on the basis that it was sent by a third party other than the copyright holder.

2) Denying the user who has content taken down the details regarding specifically what is alleged to be infringing, means the user will lack the knowledge they need to make a statement under penalty of perjury that they believe there was a mistake or misidentification.

Essentially this guts the DMCA, and give the big content companies exactly what they want: an extrajudicial (outside the courthouse) injunction on speech on the Internet. Users should challenge social media services who take such a lax view of their first amendment rights.

The last injustice originates not with service providers or copyright holders, but with the DMCA itself. It is simply inequitable that the DMCA requires that the counter-notification sent by the user must be sent to the party alleging infringement, but the original DMCA takedown notice alleging infringement and asking for the material to be taken down, is not required to be sent to the user, who is denied their right to counternotice and protect their speech on the Internet.

A new wrinkle to DMCA injustice?