Every year, Comic Con brings Storm Troopers fraternizing with Bounty Hunters back to downtown San Diego, and grown women huddled up in Tauntaun sleeping bags back to the Convention Center’s hallways.

To celebrate Star Wars Day and Comic Con returning to San Diego, and to prove learning about the law can be fun (sometimes), we present to you a short history of Star Wars trademark litigation: two cases in which Lucasfilm took people to court over Star Wars and lost.

Today, when someone says “Star Wars” you naturally think of the movies, the cartoons, and the lightsaber toys with burning capabilities so powerful they can cause human skin to “burst into flame.” In the mid-1980s though, things may not have been as clear.

In 1983, Ronald Regan launched the Strategic Defense Initiative (SDI) program at the insistence of Lt. General Daniel O. Graham to research and develop a space-based system to defend the United States from nuclear missile attacks. General Graham’s organization, High Frontier, was the think tank that first proposed the idea of using impractical, expensive, cutting-edge technologies to shoot down missiles from space.

SDI researched technologies like space based lasers that could, theoretically, intercept and destroy approaching nuclear missiles. Practically, problems arose when SDI found that shooting a missile with a laser was about as complicated as deflecting a bullet by shooting it with another bullet. It’s even more complicated though, because the bullet SDI was trying to deflect would be shot -- without warning -- from the Soviet Union at 15,000 miles per hour, and the gun SDI intended to deflect the bullet with was in space.

Naturally, a project that experimented with everything from x-ray lasers, to hypervelocity rail guns, to neutral particle beams to shoot down nuclear missiles drew attention from the public. Critics, newspapers, and even General Graham’s High Frontier organization itself began referring to SDI as Star Wars.

For some reason, Lucasfilm took offense to the term Star Wars being used as short-hand for High Frontier’s space-based anti-missile lasers. In 1985, Lucasfilm sued High Frontier for “Trademark Infringement” in hopes that a court would stop the organization as well as deter others from using the name Star Wars when referring to SDI.

Though the court acknowledged that Lucasfilm was in an unfortunate position, the court concluded that trademark law wasn’t violated and High Frontier (and anyone else) had a right to use the term “Star Wars” to refer to space-lasers of any kind.

Generally, when another organization uses a trademarked term (like Lucasfilm’s term Star Wars) in commerce without permission, then it is considered trademark infringement. Lucasfilm argued that when High Frontier used the term in television commercials supporting SDI, it did just that.

High Frontier and the court saw the situation differently. Trademark laws only prohibit the use of trademarked terms like Star Wars when it’s either placed on commercial products or used to promote someone’s services. Here, all High Frontier or anyone else was doing with the term was communicating the point of view that shooting lasers in space seemed a lot like Star Wars. As the court said, “When politicians, newspapers and the public generally use the phrase Star Wars for convenience, in parody or descriptively to further a communication of their views on SDI,” Lucasfilm has no right to stop them.

Today, a national ballistic missile shield is still about as feasible as an X-Wing’s photon torpedoes or a Y-Wing’s ion cannons. Despite this, High Frontier still lobbies for the government to spend billions on missile defense when some of that money could be used  to defend against real threats, like Imperial Star Destroyers. 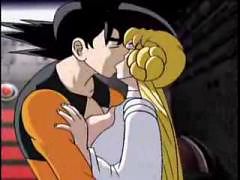 Although I’ve never seen it, the most positive review of Star Ballz on Amazon describes the movie like this: “It's crude, shoddily made, and full of groan-inducing sexual humor. I've seen worse, though.” Apparently Lucasfilm, the creators of Star Wars, hadn’t seen worse.

Lucasfilm sued MMG for copyright infringement, trademark infringement, and trademark dilution and asked the court to enjoin (stop) MMG from manufacturing or selling the movie.

The movie’s two minute G-rated trailer (which is described in the comments as better than the movie itself) takes elements of the original 1977 Star Wars movie and “parodies” them. Lightsabers become, “lightsabers that look like phalluses.” Stormtroopers become “Stormtroopers that look like phalluses.” Darth Vader becomes “Darth Vader with Mickey Mouse ears” oddly enough.

What sent Lucasfilm to the courthouse was likely the fact that the film was animated and featured children’s television characters (including Sailor Moon and Goku from the Dragon Ball cartoons). Lucasfilm alleged in its complaint to the court that Star Ballz could be marketed to and seen by children.

In January 2002, the court sided with MMG and allowed the company to continue to distribute Star Ballz. The court dismissed Lucasfilm’s copyright and trademark claims.

Generally, trademark law exists to protect consumers from fraud or deception. If someone attempts to place another person’s more famous brand name on his product to trick people into buying his own product, then the owner of the famous name has a case for trademark infringement. Therefore, Lucasfilm’s argued that consumers would be confused by Star Ballz because the name was so confusingly similar to Star Wars and people might think that Lucasfilm actually produced or officially sponsored Star Ballz in some way.

“Trademark dilution” occurs when a mark (like Star Ballz) would diminish the ability for a famous mark (like Star Wars) to distinguish itself regardless of whether consumer confusion is likely.  [See 15 U.S.C. § 1127.] Again, the court sided with MMG reasoning that parody is non-commercial use (even when sold as a DVD) and trademark law only governs commercial uses.

*all images are promotional images licensed by Lucasfilm for promotional use; therefore, some rights are reserved.

**screen capture from Star Ballz used under fair use principles


Value free legal services for creators like you throughout the galaxy?  Support them.