Filmmakers who want to reuse the culture around them for commentary and criticism need to understand fair use, but that's not the only legal issue they have to worry about. Even if their use is a fair use, the DMCA Anti-Circumvention provisions make it illegal just to bypass any encryption (also known as Digital Rights Management (DRM) or Technological Protection Measures (TPM)) that restricts access to that content.

This is exactly as ridiculous as it sounds.  Simply accessing content to make a fair use can still be illegal under federal law, even when there is no copyright infringement!

Every 3 years, the Copyright Office considers exemptions to these anti-circumvention provisions.  The process is highly problematic, but right now its the only way to provide any relief from this overreaching law that's been on the books since 1998. This year we submitted comments on three important exemptions (regarding installing software of your choice on your devices, as well as your right to reuse video content under fair use).

On Wednesday May 20, we testified regarding Class 6, which is all about allowing filmmakers to bypass encryption on DVDs, Blu Ray discs, and online sources, to make use of content under fair use. 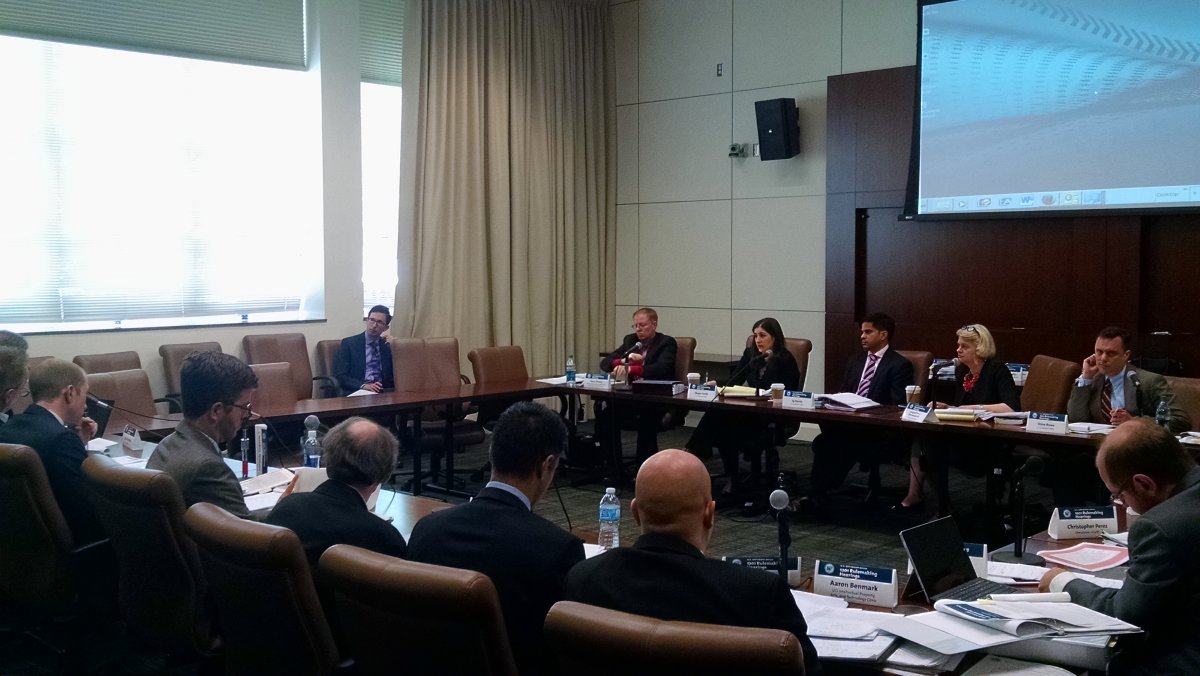 We want to thank California Western law students Emory Roane and Patrick McManus for their great work helping prepare comments and testimony in this proceeding.  Executive Director Art Neill and Emory Roane are pictured below along with other proponents of Class 6, including Jack Lerner, Aaron Benmark, and Rahul Sajnani, of the UC Irvine Intellectual Property, Arts, Technology Clinic, Christopher Perez of Donaldson + Callif, and Gordon Quinn and Jim Morrissette, of Kartemquin Educational Films.

The proposed class 6 is described as follows

In our testimony May 20, we focused on key areas where we are requesting modest improvements, including Blu-Ray discs as well as non-documentary filmmaking.

The record in this proceeding establishes that 4k and ultraHD video standards have arrived. The quality of content on current Blu Ray discs, at 1080p HD,  is now often the minimum distribution and broadcast standard.

We can support this from our direct experience.  New Media Rights attorneys regularly review and negotiate distribution contracts for filmmakers, including domestic and international distributors.  In the last 3 years we’ve seen the standards rise for distributors, and for audiences, across the board.

Indeed, even when a filmmaker is offered a modest distribution contract, distributor requirements regarding reprocessing and uprezzing of footage, and editing of content, which can heap additional costs on projects that are already in the red, sometimes demanding significant portions of the licensing fee just to meet distributor technical standards. Access to Blu Ray ensures that filmmakers are relegated

If the the current exemption, which is just for just DVD's and online sources, is simply continued and not updated for modern filmmaking in 2015, the practical effect is to relegate filmmakers to degraded footage and diminished options for distribution channels.

All filmmaking purposes should be exempt, not just "documentary"

A. Drawing bright lines between types of filmmaking is difficult

The record itself seems to show implicit disagreement about what to call non-documentary film... "narrative"? "fictional"? Its difficult to understand why the Copyright Office would entertain the task of drawing lines based on such difficult distinctions.

The record also displays some question regarding what constitutes documentary filmmaking itself, and whether biopics should be included in that definition, particularly in the DVD CCA (the DVD copy protection folks) comments on pages 14-15.

Biopics in particular are great examples of works that incorporate both nonfiction and fictional elements, and suggest that drawing lines within filmmaking creates additional confusing standards,

We testifed about our work with countless filmmakers who distribute using online distribution like Youtube and Vimeo that would not describe their work using the terms fictional, narrative, or documentary filmmaking, yet they certainly make fair use of works and deserve to access those works as much as any other artist.

Regardless, there are many examples  provided by proponents of non-documentary films that utilize content in fair use. Filmmakers who make non-documentary film can produce highly transformative films, so they should be able to circumvent TPMs regardless of what genre their films fall under.

B. Opponents focus on the idea that films with fictional content are “typically entertainment” does not obviate the need to protect all filmmakers rights’ circumvent for purposes of fair use

Opponents AACS LA  (Blu Ray) and DVD CCA (DVDs), wrote, borrowing a quote from the 2012 Section 1201 Rulemaking: Recommendation of the Register of Copyrights that “‘the purpose of a fictional film is typically entertainment.’”   The record shows otherwise.

In fact, whether or not fictional films are “typically” entertainment is irrelevant to whether an exemption fictional filmmakers should exist. Even the use of the word “typically,” rather than a word like “always,” acknowledges that there are other purposes to fictional filmmaking, and as proponents discussed in the record, the standard for granting exemptions is whether there are likely to be noninfringing uses. 9 Whether a film entertains the audience should not matter for these exemptions, and the Copyright Office should acknowledge that it is a challenging position to draw lines between where nonfiction ends and fiction begins. The Copyright Office should also acknowledge the challenge in drawing lines based on types or genres of films, and focus on making sure fair uses will be exempt from liability.

In addition to focusing on the points above, we asked the Copyright Office as they hear the testimony, look at the record, and weigh the harms alleged by the parties, to keep in mind the following.

1. Remember, the proposed exemption ONLY permits uses covered by fair use.  If the use is not a fair use then anti-circumvention & copyright infringement claims persist.