New Developments in the NBC-Comcast Merger

There has been a lot of unease expressed in the past few weeks from community media groups, media reform groups, entertainment journalists, tech policy writers and others about the now agreed upon Comcast and NBC merger. This week The New York Times reported that General Electric has reached a "tentative agreement" to buy Vivendi, a French media company that had a 20 percent stake in NBC Universal. This step in the negotiating process was apparently "crucial to completing the G.E.-Comcast deal". The Times article, "G.E. Pact with Vivendi Clears way for Sale of NBC", says that under the "current outlines of the agreement...Comcast would pour in billions of dollars in cash and its own cable channels for a 51 percent stake, while G.E. would hold an initial 49 percent and contribute about $12 billion in debt." Jeff Zucker is to remain chief executive of the venture according to Rueters. 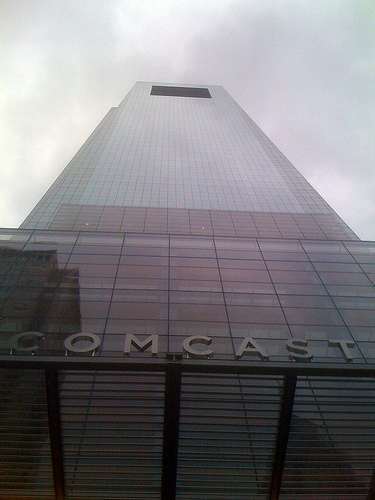 On December 3, 2009, the merger was formally announced by the companies. Representative Henry Waxman (D-Calif.) said that the agreement "has the potential to reshape the marketplace. This proposal raises questions regarding diversity, competition, and the future of the production and distribution of video content across broadcasting, cable, online and mobile platforms. It is imperative that the FCC, the Justice Department, and the FTC rigorously assess whether this transaction is in the public interest".

Public interest groups plan to press the Obama Administration to enforce his campaign promises of reviving anti-trust enforcement. During President Obama's campaign he said, "I strongly favor diversity of ownership of outlets and protection against the excessive concentration of power in the hands of any one corporation, interest or small group."

The administration needs to consider that this media deal has far-ranging implications. A number of public interest groups are now calling for the administration to exercise their anti-trust authority and demonstrate disapproval of continued media consolidation "mega-mergers" as a breach of anti-trust laws.  The negatives incentives (ie. towards net neutrality and a fair content competition playing field) created buy a service provider like Comcast having such a far reaching content properties should be closely scrutinized.

What the merger entails

Data compiled by Free Press on the merger says that Comcast serves customers in 39 states and reaches 24 million homes. NBC Universal owns broadcast properties and cable channels like Bravo, CNBC, MSNBC, NBC Sports, Oxygen, and USA Networks. It also owns Universal Pictures as well as web sites including Hulu and Fandango. In Cecilia Kings's Washington Post Article, "A new kind of company, a new challenge for feds", Bernstien Research notes, "Comcast would be calling the shots for one out of every five viewing hours in the United States".

Public-interest groups warn that that this "mega-merger" will most likely mean higher prices, fewer choices, less diversity in content and less access for you the consumer. In Josh Silver's (executive director of Free Press) article "Too Big to Block? Why Obama must stop the Comcast-NBC Merger" he writes that if history repeats itself  "it will trigger a "merger wave" throughout the industry as distribution companies and content companies seek to "muscle up" to match the new threat that the vertically integrated Comcast poses". Media consolidation in the past has lead to fewer voices, viewpoints and less diversity in ownership and programming. Silver emphasizes that current anti-trust can and should block the NBC-Comcast deal for several reasons.

One big reason is that Comcast-NBC would control several distribution platforms including a major television network, the largest cable company and the largest internet service provider. "The merged company will have strong incentives and the market power to discriminate in granting access to its wealth of programming. It will have the incentive and market power to enforce anti competitive "bundling" and price-gouge other cable companies, especially smaller cable companies." An example of "anti-competitive bundling" would be putting Internet access to NBC programming behind a paywall that would force consumers who want to watch NBC online to buy a Comcast internet and television subscription. According to the New York Times article, "Web-TV Divide is Back in Focus with NBC Sale" Comcast has already used its power to limit how many shows are available in the past online and now owning part of Hulu it will be in their best interest to restructure Hulu, "the biggest site that threatens to undercut its core business". 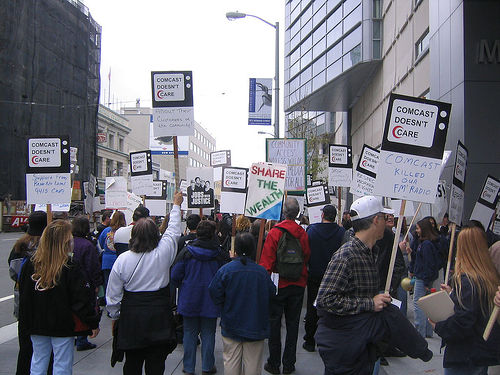 Marc Stier's blog cross-posted on Young Philly Politics argues that "Comcast like the rest of the cable industry is about monopoly". Comcast headquarters are located in Philadephia and Marc writes that Comcast's success has not come by being innovative or having good customer services, but from wielding political and economic power. "Here in Philadelphia Comcast has worked vigorously to deny other companies the right to wire the city. It has negotiated sweetheart deals with our city government that allow it to raise its rates even where there is no economic justification for doing so. And it has encouraged the city to stall for years on the requirement that Comcast contribute to public access TV in the city."

In fact, Comcast doesn't have a great reputation servicing the public on the national level either. On August 1st, 2008 the FCC ruled against Comcast's BitTorrent blocking. At the time there were "at least five class-action lawsuits pending against Comcast as a result of its BitTorrent blocking". The FCC did not order a direct punishment but told Comcast that it would have to disclose details about it's current network management practices and stop interfering with traffic on peer-to-peer file sharing technologies. Kevin Martin, chairmen of the FCC said "If we aren't going to stop a company that is looking inside its subscribers' communications, blocking the communication when it uses a particular application, hiding what it's doing by making its consumers think that the problem is their own, and lying about it to the public, what would we stop?" to NPR news.

The significant thing that manifested from this case was it created more support around Net Neutrality as a tangible example of content and technological discrimination by an Internet Access Provider. Two democratic FCC commissioners — Jonathan Adelstein and Michael Copps — made it clear that they would also like to see new rules against discriminative behavior. Copps said a specific non-discrimination statement would ensure that “…the commission does not have a one-night affair with Net Neutrality.”  The debate on "Net Neutrality" is occurring simultaneously with the merger debate, and while the two issues will likely be "siloed"  and separated as much as possible from each other, robust Net Neutrality rules may actually be critical in addressing many of the deepest concerns raised by the merger.

The merger is certainly bad for the consumer and some argue even bad for our democracy (see Marvin Ammori's latest article "Comcast-NBCU Merger is Bad for Democracy" ) where he writes that there are three main reason why the merger is bad for democracy. "Targeted private censorship, closing out independents, favoring one-way Comcast-controlled communications. It is not routine business. The public should take note of this effect on our democracy."

If you agree the merger is bad for innovation, business and democracy, you can Take Action against the Comcast-NBC merger by signing the Free Press petition and look out for local organizing efforts against the merger.