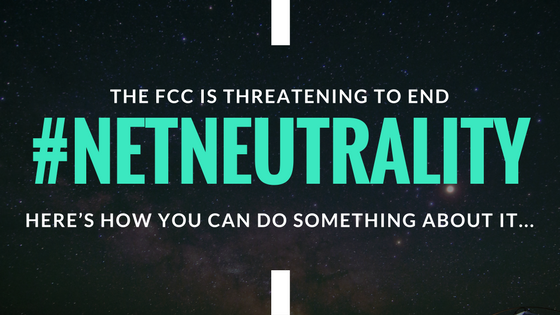 The 2015 Open Internet Rules preserved the internet as we know it at a time when Internet Access Providers were trying to change the internet forever for their own narrow profit motives. The rules ensured that the Federal Communication Commission could play a constructive role in ensuring competition, of ideas, products, and services

In 2014 we made Comments and Reply Comments, asking the FCC to classify the internet under Title II to protect internet consumers, innovators, and creators. We were cited numerous times in the final rule, particularly with respect to extending the rules to mobile broadband.

Recently, the FCC has done an about face, and now proposes an end to these successful net neutrality protections. This would be disastrous, so we recently submitted comments to the FCC addressing why the Open Internet Rules should remain and also highlighting the dangers of the proposed changes.

We particularly want to thank volunteer attorney Kyle Reynolds, as well as student fellow Cat Mineo, a 3L from California Western School of Law for their work on these comments along with Executive Director Art Neill.

Our comments focus on the reasons why the current classifications under Title II and FCC authority should remain. We also present examples of narrow business advantages reaped by the proponents of ending net neutrality and what these proponents don’t want you to know about the harms of ending the current regulatory scheme.

Our comments also provide a reminder about the public policy behind the current standards for internet conduct which are in danger of disappearing if the FCC should move forward with its proposal to end net neutrality protections.

Visit this post to find out what you can do to support net neutrality.