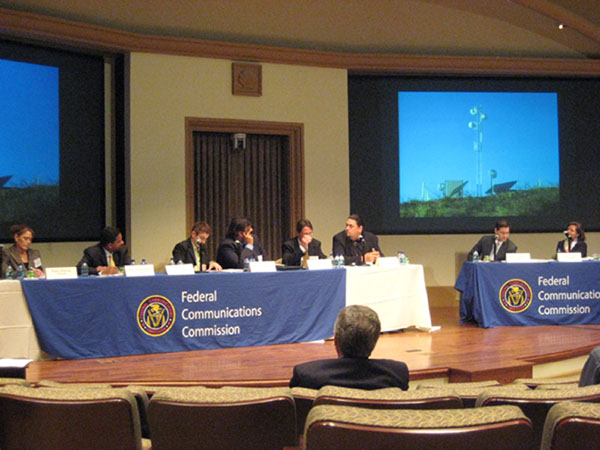 Thursday’s FCC Broadband Field Hearing at the University of San Diego gave us some incredible insight into the future of spectrum availability and mobile applications. FCC Chairman Julius Genachowski and Commissioner Meredith Attwell Baker visited San Diego to gather information from key policymakers and the public for the development of the National Broadband Plan. On Wednesday during Chairman Genachowski keynote address at CTIA wireless industry trade association convention in San Diego he said that there is a “looming spectrum crisis” and studies show that bandwidth demand is only expected to rise in the upcoming years. Spectrum refers to licensed and unlicensed electromagnetic waves that carry high and low frequencies which can be used for communications technologies.

The first panel was titled: “Mobile Applications That Will Change the Way We Use Broadband”. Some topics that were discussed were how many communication devices police officers use, solutions to problems with cyber security and life-cycle (personal and public health) management for cell phones. I spoke with Darrel Drinan, CEO of PhiloMetron, a San Diego company that works on developing wireless diagnostic products and services. Mr. Drinan said that the possibility of bandwidth collapsing could lead to a serious and possibly life-threatening crisis when doctors have to prioritize on what technologies to use on their patients. The company presented two devices that easily attach to an individual and wirelessly monitor vital signs, one for patients in trauma and critical condition, and another for day to day use which tracks basic calorie intake that will text you to get up off the couch!

Amongst the interesting points about apps that are coming around the corner, UCSD Professor William Griswold pointed out that while the EPA has 5 sensors tracking San Diego Air Quality (an area 4000 square miles), Seacoast science, a local company, produces a tiny device that can track air quality (over 30 compounds) from cell phones. The public health consequences are tremendous, but these apps will require bandwidth.

Chairman Genachowski, in his introduction to this panel as well as during his CTIA address, said that the government plans on bringing a three-fold increase in the next few years to the amount of spectrum open for commercial use. The Chairman set the tone for the panel by juxtapositioning this against an expected thirty times increase in demand.

Spectrum issues impact our ability to provide mobile broadband to remote tribal areas with broadband access. Matthew R. Rantanen, President of Tribal Digital Village and a member of the Southern California Tribal Chairmen’s Association spoke about how there are 19 federally recognized tribes in Southern California. He asked the Commissioners to support unlocking some more unlicensed spectrum so that these communities can have more available broadband access. Mr. Rantanen said that the “killer app for our rural and rural tribal regions IS the Internet.” John Badal’s customers are located in New Mexico and many are on Navajo reservations or on rural land. He explained that some areas are 50 miles to the nearest city and residents can’t reach 911 or EMT Services. Rural areas across America many times do not get broadband service which not only leaves them living in a different world, but can create obvious risks if someone has any type of emergency. 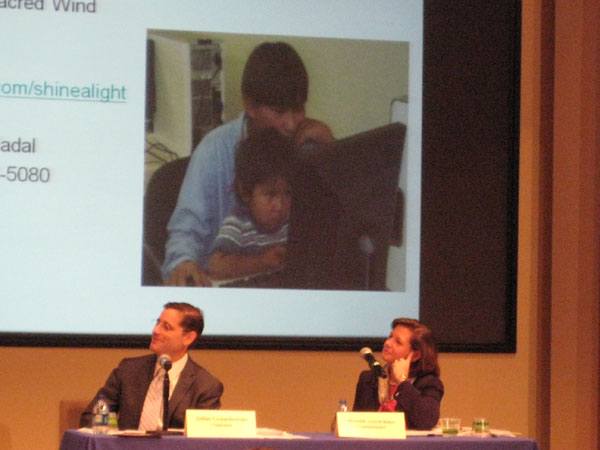 Both Chairman Genachowski and Gigi Sohn raised the issue on the second panel of how low-density populations such as the tribal villages and Navajo reservations are not economically viable for commercial companies. Large IAP’s who say that they support broadband service for every American simply aren’t providing services to customers in rural areas because the value proposition isn’t there. Small groups like Tribal Digital Village are making the difference using unlicensed spectrum.

Gigi Sohn mentioned that in order to close the digital divide we must support Act S. 649 so that the secondary market can provide for these regions even if AT&T, Comcast, Time Warner and Verizon won’t.

Radio Spectrum Inventory Act S. 649 would require the NTIA (National Telecommunications and Information Administration) and the FCC to create an inventory on each radio spectrum band from 300 megahertz to 3.5 gigahertz, which would basically account and map every spectrum nationwide. This information if Act S. 649 passes would be available to the public through the internet. Please contact your senators about this bill. The best way to serve communities that are on the wrong side of the Digital Divide is by accounting for all the spectrum available.

Gigi Sohn also related the arguments (which was seconded by Victor Bahl of Microsoft Research) of Public Knowledge’s Legal Director, Harold Feld, that we are at “peak spectrum.” He says that it is “time to use the spectrum equivalent of conservation ‘green/renewable/reusable’ with neighboring bands” because there is not enough spectrum.

In addition to the real limitations of spectrum, the panel also covered key points including how unlicensed spectrum has led to dramatic innovation, the necessity to open up whitespace, and the likelihood of a solution including a hybrid licensed and unlicensed approach.

There is officially 131 days left until the FCC has to deliver a National Broadband Plan to Congress. As the FCC does more field hearings, I encourage you to attend a meeting, contact your local Internet Access Provider and get involved for the fight for net neutrality by signing petitions for the Internet Freedom Preservation Act of 2009 (H.R. 3458)

Take a stand for your new media rights and leave comments to the FCC about what you want from your National Broadband Plan at www.openinternet.gov