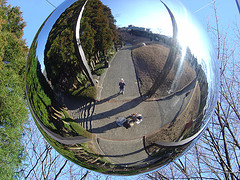 After much anticipation, Google's beta release of their Chrome browser (based largely on Webkit) was launched on September 2nd. During the morning leading up to the release, tech forums were buzzing with rumors, screenshots of deleted but previously cached pages appeared, and speculations raged. After downloading and tinkering with Chrome, developers and users alike are impressed with what they see. Chrome is not only stable and fast, but shows promise to weaken the dichotomy between browser and operating system; in other words, Chrome is "cloud" friendly.

On its surface, Chrome is beautifully simple and extremely fast. Beneath these obvious qualities, Chrome also delivers some powerful and innovative features and is extremely robust in its ability to handle heavy web activity. I haven't ran any benchmark tests myself, but ZDNET's test results look extremely promising, showing Chrome performing at speeds significantly faster than any of its veteran rivals. Chrome also appears to be very stable. While competing browsers such as Firefox and Internet Explorer 7 crash entirely when one tab crashes, Chrome processes each tab separately, closing only the tabs that crash, not the entire browser.

Chrome has also been released under a fully open source license, which stands as a powerful example of how open source licenses can be very beneficial commercially. By releasing their code, Google hopes that developers and users will not only help help them make Chrome more user friendly, but also change the direction of web development so that other Google products can stay functional and relevant in a fast changing technological landscape. As Google provides more online applications on the cloud such as Gmail, Google Docs, and Google Calendar, Google will increasingly face challenges in meeting compatibility requirements; Chrome seems to be a defense against such incompatibility issues.

While the Chrome is currently only available for Windows users, Google plans to release Mac and Linux versions in the near future.

Hakone OAM: Chrome Spere is shared on Flickr.com under an Attribution-Noncommercial-No Derivitives CC License by jpellgen