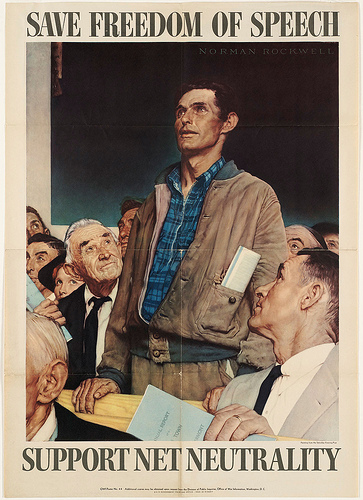 The FCC's new rules regulating Network Neutrality split the Internet. No more is it the Internet, singular; it’s the Internets, plural. Or more precisely, it’s the two Internets: The wired and the wireless. And the new rules leave the latter virtually unprotected. With the rules soon to come into affect this fall, and public interest and industry groups aligning for lawsuits, here's what the fight is all about.

What is Network Neutrality?

Specifically, the FCC's Net Neutrality rules adopt three tenets: Transparency, no blocking and no unreasonable discrimination. But even though one tenet is anti-discrimination, the tenets themselves discriminate based on how one accesses the Internet. They distinguish between "fixed broadband providers" (essentially meaning Internet accessed via cable or DSL) and "mobile broadband providers" (essentially meaning Internet accessed wirelessly via cellphones). This discrimination splinters the Internet. And the result: A relatively free and open Internet for those accessing by wire, but less so for those accessing wirelessly.

The transparency tenet is the only non-discriminatory tenet. It applies equally to both fixed and mobile broadband providers. This rule mandates these providers to: “[P]ublicly disclose accurate information regarding the network management practices, performance, and commercial terms of its broadband Internet access services sufficient for [(1)] consumers to make informed choices regarding use of such services and [(2)] for content, application, service, and device providers to develop, market, and maintain Internet offerings.” More basically, this means that Internet service providers must inform consumers and developers of its service’s quality. This information includes things like connection speed and price.

Net Neutrality Challenges: Coming to a Court Near You

To many, these rules irreversibly harm the Internet. That’s why over eighty groups lambasted them prior to their official adoption. And that’s also why groups such as Free Press and Access Humboldt have filed lawsuits challenging the rule’s validity, claiming the rules arbitrarily discriminate between wired and wireless Internet access and thus are void. But actually proving a rule void as arbitrary isn’t easy. The standard of review is highly deferential to the FCC’s rule. And as the Supreme Court recently reiterated in Federal Communication Commission v. Fox Television Stations, the standard is “narrow,” and a court cannot “substitute its judgment for that of the agency.” So basically, if the FCC can provide a reason to treat wired and wireless Internet differently, a court may be unlikely to find that the FCC acted arbitrarily. But open Internet groups aren’t the only ones dissatisfied with the rule; Internet access providers are as well. They believe the FCC’s rules exceed their “limited jurisdiction over cyberspace . . . .” And Verizon will almost certainly file a lawsuit challenging the rule on those grounds.

One Is Better than None

Yes, the FCC’s new rules splinter the Internet into two. But the rules do further an open—albeit, splintered—Internet. Though an open Internet in entirety would be ideal, an open fixed broadband Internet is "a step forward."